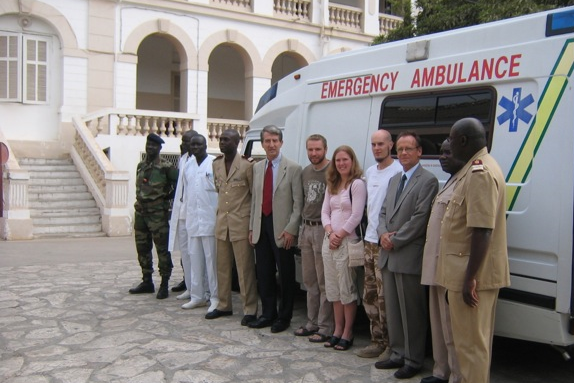 Our first project started off in 2006 when we bought a vehicle from the London Ambulance Service. We entered a charity rally called the Plymouth Dakar challenge. This is a 4000-mile rally across Europe and North Africa finishing in Dakar, Senegal.

This charity event used the premise of giving the participants an adventure of a lifetime while at the same time raising money for charity and selling your car to officials when and if you get to the finish line. We decided to take an ambulance instead of a car and donate it directly to the Principal Hospital in Dakar. It was filled with medical equipment and medicine that was shared between the hospital and a number of other charities and clinics. The ambulance was handed over to the hospital in collaboration with the British Embassy in Dakar. The British Ambassador, Peter Newall was instrumental in helping with the liaison. As a thank you for the donation to the hospital, Marks name was added to the vehicle livery as the principle donor.