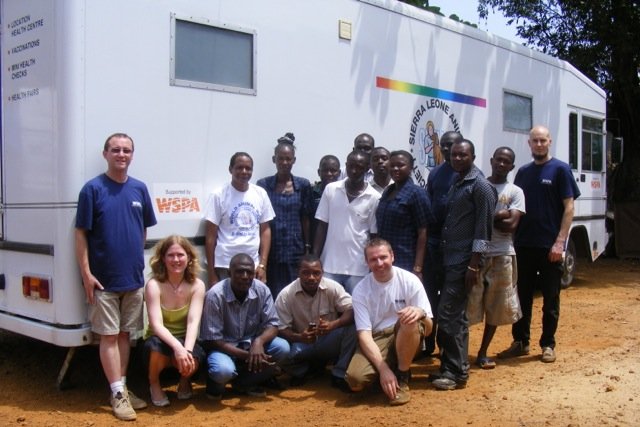 This project was carried out together with WAP (Worldwide Animal Protection) who provided some funding and connected us with the Sierra Leone Animal Welfare Society in Freetown. We were charitably given a mobile health clinic that was no longer being used by its owners. It was then converted into a mobile veterinary clinic to reduce the Rabies epidemic in Sierra Leone.

The stray dog population had expanded since the civil war due in part to the abundance of food including bodies of the deceased who were left in the streets after the fighting. The dogs would then convey the disease to the population through contamination via dog bites. It was not always known that the dogs were infected so treatment was not always sought. It was usually too late to treat once the disease was detected and death was inevitable.

We received a lot of donations for this trip such as an operating table from our local vet, various medical supplies, and animal weighing scales. We changed the flooring and fabricated a stainless steel operating table which flipped down so the bench underneath could be used for sleeping when out in the field. The operating table would fold down from the wall during the day to carry out surgical operations.