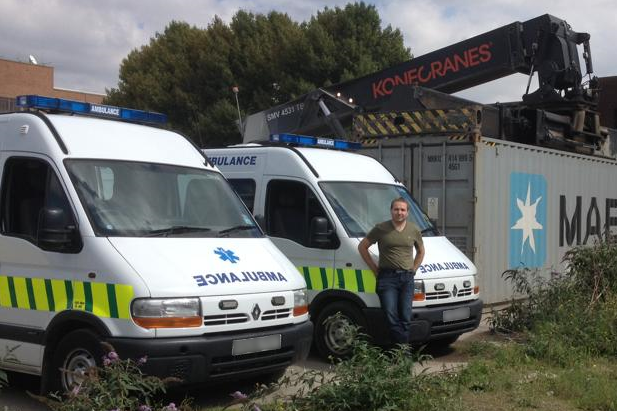 We supplied the Ebola Task-force in the Capital of Sierra Leone with Ambulances to fight the Ebola Crisis as well as provide 4X4 units to help provide a response in the provinces where transportation and road quality is poor. Six vehicles were sent in total with help from the Sierra Leonian High Commissioner, His Excellency Edward Turay at the High commission in London. He and his team helped find a sponsor to pay for the shipping and liaised with the Sierra Leonian Prime Minister to successfully get them abroad. A special thank you to His Excellency and his team for their hard work and dedication.

The vehicles were handed over to the Ebola Task Force at the start of January 2015.

Amongst the work they will carry out are duties such as:

The BBC covered some of the story of the project. Thanks to the BBC reporter Emilia Papadopoulos for her news story.

Interviews were carried out on Radio Five Live, Radio Surrey and Sussex as well as BBC London 94.9 on the Penny Smith/Paul Ross Breakfast show.

One of the vehicles will be handed over to a charity, Smiling World Foundation, after the Ebola Crisis is under control. The founder of the Charity, Dr Raffaella Gabassi was instrumental in paying for the shipping costs and the project could not have been done without her. A massive thank-you!

Smiling World Foundation is dedicated to providing oral healthcare in Sierra Leone to those who would not otherwise be able to afford it. Their vehicle will be able to undertake both A&E and clinic duties in its new life. There are photos of the type of clinical work that the vehicle will be involved in on her website.

I was shown graphic images of the terrible infections and disfigurement caused by the lack of dental intervention and facilities in Sierra Leone.

This Ambulance will bring medical aid to people who could potentially die from the infections that result from the lack intervention and basic antibiotics. It will transport the Doctors and nurses and be able to move between villages to cover a greater area. It will also be able to take the more serious cases to the hospitals on the stretcher in the back of the vehicle.